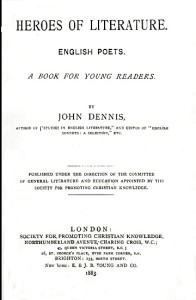 A BOOK FOR YOUNG READERS.

AUTHOR OF “STUDIES IN ENGLISH LITERATURE,” AND EDITOR OF “ENGLISH SONNETS : A SELECTION,” ETC.

PUBLISHED UNDER THE DIRECTION OF THE COMMITTEE OF GENERAL LITERATURE AND EDUCATION APPOINTED BY THE SOCIETY FOR PROMOTING CHRISTIAN KNOWLEDGE.

POETS OF THE NINETEENTH CENTURY

“I think I shall be among the English poets after my death,” were the modest but proud words of Keats, and comparatively brief though the time has been since the death of “Adonais,” we can say without rashness that his place among the immortals is secure. There is no poet of his century whose work is more intensely poetical, and if some of it bear the marks of immaturity, even that portion is rich in lovely imagery, pervaded by a sense of beauty, and totally free from prosaic elements. The faults of Keats are the faults of genius spurred on by a noble ambition, and wanting the restraints of experience. He was but a boy, be it remembered, when he published his “Endymion; ” he was scarcely more than a boy when he died; but there is nothing more remarkable in his brief career than the rapid intellectual growth which marked those few years. “Endymion,” published in 1818, is a poem of promise a garden of exquisite spring blossoms, not an orchard of golden fruit; but the “Hyperion,” the “Eve of St. Agnes,” and the “Odes,” published a year or two later, show the vigour of imagination and the consummate mastery of form which entitle us to speak of Keats as a great poet.